Why are there seed shells on some of my Sunflower Shoots?

Whilst harvesting the Sunflower Shoots, I found myself sort of zoning out, my thoughts were wandering as I was removing the seed shells from the newly-formed leaves so you wouldn’t have to.

I absolutely love what I do, the planning, the seeding, the transplanting, the weeding, the picking, the cooking, the eating and the providing of such nutrition to all of you.  I’ve been reading many articles and seeing posts about the future of food security and it brought to mind how convenient food has become and how complacent people are in that we can buy food from anywhere in the world at any time.  I recently heard someone complaining about the price of cauliflower and that there wasn’t asparagus at the store one week.  Do people know from where their food originates?  Sometimes I think not.

If you have grown your own food or know someone who has grown their own food, it’s quite a complicated and yet simple process.  To think that the tiniest seed can become a plant which is not much different than our own bodies – each individual part of the plant having its own purpose at just the right time, having its own role to play to nourish and complete the entire plant during its life in order to give back to the earth in some form, whether through us or another animal or simply by regenerating and/or refurbishing the soil for those living beings existing around it.  It’s all quite amazing.  It’s not just “oh I’ll get this at the store”.  Many beings: in the soil, above the soil and in the air and the very air itself have contributed so much toward this vegetable or fruit to reach perfection.

So, if you see a seed shell on the tip of one of your Sunflower Shoots, I’ve left it there intentionally.  It’s a reminder that someone else has grown this particular tidbit of goodness for you in the correct medium and has nurtured it for you and delivered it to you or a store to make sure it ends up on your plate in its finest form.   Let’s all make a point to think about where food starts and the kind of life it lives and with whom or what it shared its life before being consumed by you.  I just wanted to say that.  Sometimes we need a reminder. 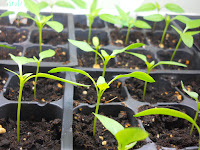 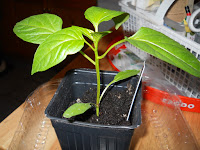 The pepper seedlings on the left are about 1” high.    Six weeks later, each plant is about 6” high.
Each plant will be up-potted two more times and, once in the soil, will grow thicker and taller and start forming flowers, then the fruits.  I started the hot peppers January 26 and the sweet peppers January 30.  Some of the seeds I had saved  didn’t germinate and I planted newer seeds in early February.  We can begin eating these peppers green in August, and in their true colour (red, yellow or orange) in late August or early September.  Then there’s the chance of frost any night after that which will seriously harm the plants, and a second frost will kill them.  It’s a risky business but one we, as gardeners, are very willing to take, despite the early preparation, the work involved in between seed and fruit.  It’s a challenge more than anything, because we love peppers so much.  Pepper plants can grow up to about 4 or 5 feet and spread about 3 feet wide.   Most provide 10-15 peppers, or more depending on the type of pepper.

Other than some tomatoes I put into a few jars and some still in the freezer, I can tell you almost every tomato grown here last season was enjoyed in some form.  We used them all.  Same for the peppers and onions.  We’re planting in the Greenhouses TODAY, which means foods will be more plentiful in the upcoming months.  Really, it’s time to stop farting around with these little trays indoors and get back to the real thing.  In the meantime , we’re still providing a little bit of excellentness to keep you healthy as follows:

Pea Shoots  $2 bag  It’s hard to tell if they’ll be ready by Friday, if not then next week for sure.
Tomato Powder  $3  125mL jar
Sprouts:  $3 bag
Ancient Eastern Blend (fenugreek, lentils, kamut & adzuki)
Crunchy Bean Mix   (peas, lentils and garbanzos)
Sandwich Booster (clover, alfalfa, radish and mustard)
Spicy Lentil Crunch  (lentils, red clover, alfalfa, radish & mustard)
Spring Salad Mix  (broccoli, radish, alfalfa & clover)
Daikon Radish  NEW  This one is my new favourite, I made a little bit so you can try a smaller bag if you like, a little goes a long way with so much flavour  $1 bag

If you'd like to purchase any of the above items, I'd be happy to provide them if available after our regular customers have ordered.  Perhaps you might like to be added to our Weekly Delivery List.  I send my email out every Wednesday, collect orders Thursdays and deliver Fridays (or another day convenient to us and you if you're not too close to home).  See Contact information and email or call me.  Thanks.

And remember some of Day Brighteners Farm produce can be found at Heather's Healthy Harvest in Kemptville.

Until next post, have a great every day.
Jo